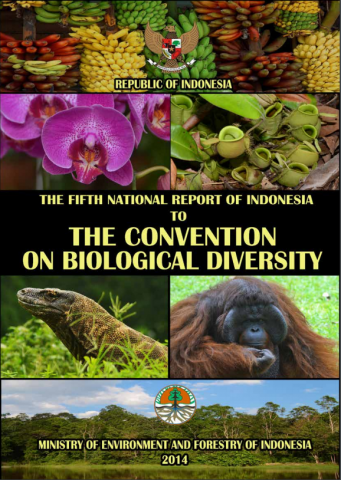 The 5th National Biodiversity Report is a report on Indonesia’s national implementation of the Convention on Biological Diversity articles and work programs. An overview on Status, Trend, and Threats of Biodiversity is presented in Chapter 1. In this Chapter, Indonesia’s biodiversity condition is reported. The documented species diversity comprised of 1,500 species of algae, 80,000 fungal species, 595 species of lichens, 2,197 fern species, and 30,000 – 40,000 of spermatophyte species, accounting for 15.5% to the world flora. Additionally, 8,157 fauna species of mammal, bird, reptile, fish and 1,900 butterfly species accounting for the 10% species on the earth have also been documented. The number of species that utilized for food and agriculture has increased with respect to total species reported in the 4th National Biodiversity Report. Similar situation occurred in the number of species for animal farming. Under the limited resources to covers Indonesia’s 3.25 million km2 of water areas and over 2.55 million km2 of Economic Exclusive Zone with 80,791 km coastal line of total 7.81 million km2 of the Republic of Indonesia’s territory, the number of documented fauna reached 5,319 species. Documented data on mangrove plant, algae and sea grasses have shown 6,396 species. Of those 6,396 species, total of 1,077 algae and marine flora were found in Indonesia’s waters. The main threats to biodiversity are: (i) habitat change; (ii) influx of Invasive Alien Species; (iii) pollution; (iv) over exploitation; and (v) climate change. The threats must be eliminated through executable action plans and strategy. Indonesia is in the process of updating Indonesia Biodiversity Strategic and Action Plan (IBSAP) 2015- 2020. The description of IBSAP content is presented in Chapter II. Based on the 2012 review on IBSAP implementation, the National Development and Planning Agency (BAPPENAS) showed that at least eight components influenced biodiversity policy development and activity. Those components are: (i) inadequate local/provincial insight on the function of biodiversity; (ii) biodiversity issue has not yet become the main issue; (iii) insufficient political support; (iv) inadequate human capacity with biodiversity issue recognition; (v) lack of synergy of biodiversity programs; (vi) less-publicized biodiversity policy; (vii) the absence of monitoring and evaluation institution at local level; and (viii) lack of stakeholders participation.