The Japan-ASEAN Integration Fund (JAIF) project promoted the application of DNA barcoding in ASEAN and was implemented by the ASEAN Centre for Biodiversity (ACB), in partnership with the Philippines’ Department of Environment and Natural Resources-Biodiversity Management Bureau, Institute of Biology-University of the Philippines Diliman (IB-UPD), and the Makiling Center for Mountain Ecosystems.

The ACB-JAIF project provided training opportunities for the ASEAN Member States to facilitate faster species discovery and identification and thus, conserve biodiversity. The programme produced two books – the Field Guide to the Vascular Plants of the Mudspring area, Mount Makiling Forest Reserve, Philippines and Manual on DNA Barcoding of Vascular Plants in the Tropics.

DNA barcoding is a method of species identification that examines the species at the molecular level. It complements the morphological identification of species, which only examines the physical form and structure of organisms. DNA barcoding can increase capacities and the level of knowledge in taxonomy and strengthen efforts to conserve biodiversity, mitigate the spread of invasive alien species, and monitor and manage ecosystems.

“In more than 250 years of taxonomic research, scientists have identified only a fraction of all species on Earth. Increasing pressures on biodiversity stresses the need for us to work harder – and faster – to identify and conserve species. DNA barcoding provides this advantage by hastening species identification and discovery,” said Dr. Theresa Mundita Lim, executive director of the ACB

Philippine taxonomist and lead author Dr. Edwino S. Fernando stated that the field guide features descriptions of 87 species found in the Mount Makiling Forest Reserve (MMFR), one of nine AHPs in the Philippines, and of 51 in the region. Specimens used for the DNA barcoding training were sourced from MMFR, which is known for its species richness and serves as the forest laboratory of the students at the University of the Philippines Los Baños. DNA barcodes were generated for most of the species in the book.

Details on the DNA barcoding process, from specimen collection to laboratory work and sequence analyses and bioinformatics, are covered in the manual on DNA barcoding. According to lead author Adrian U. Luczon of the IB-UPD, DNA barcoding can be used widely in ASEAN to increase knowledge of taxonomic groups and biodiversity richness of AHPs and protected areas. The process can also support efforts in species conservation, ecosystem restoration, illegal wildlife trade, and wildlife law enforcement, among others.

For more than a decade, the ACB and JAIF have been working together to enhance taxonomic knowledge and skills in ASEAN. This long-term collaboration helped train more than 600 representatives from the ASEAN Member States and produced manuals and field guides on different taxonomic groups found in various AHPs and protected areas in the region.

The development partners expressed their hope to continue this partnership to spread the use of new technologies in taxonomy, and support science-based decision making and policy development in biodiversity conservation. This will be crucial in the achievement of new global conservation goals, particularly those stated in the impending post-2020 global biodiversity framework of the Convention on Biological Diversity.

“As we celebrate the 50th year of ASEAN-Japan friendship and cooperation next year, Japan is firmly committed to standing by ASEAN, as well as continuing cooperation in a wide range of fields, including environmental corporation,” said Mr. Yoshiaki Inada, First Secretary, Mission of Japan to ASEAN

The books can be downloaded from the ACB’s official website at www.aseanbiodiversity.org. 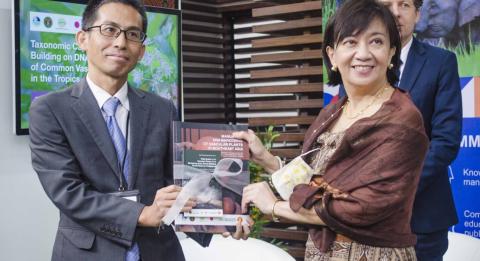