COMING UP: The United Nations Biodiversity meetings in Nairobi!

WHAT: Fourth meeting of the Open-ended Working Group on the Post-2020 Framework

WHY: Advance progress on the #post2020 global #biodiversity framework

The fourth meeting of the Working Group (WG2020-4) will be held from 21 to 26 June 2022 in Nairobi, Kenya. Information on registration will be  made available on the meeting's webpage in due course.

The co-chairs of WG2020, with the help of the CBD Secretariat, released the first draft of the Post-2020 Global Biodiversity Framework on 12 July 2021 building on the zero draft discussed during the second meeting of WG2020 in Rome, Italy in February 2020 and its updated draft that was released in July 2020 which included the outcomes of WG2020-2. Negotiations of the post-2020 global biodiversity framework, informed by the First Draft, started during the third meeting  and will resume at the fourth meeting  in June 2022 in Nairobi, Kenya

The post-2020 global biodiversity framework will be presented for consideration at the resumed session of COP-15, in Kunming, China later this year.

The first draft of the framework is available in the following languages: [Arabic] [Chinese] [English] [French] [Russian] [Spanish]

The upcoming UN Biodiversity Conference in Kumming, China, is made up of: 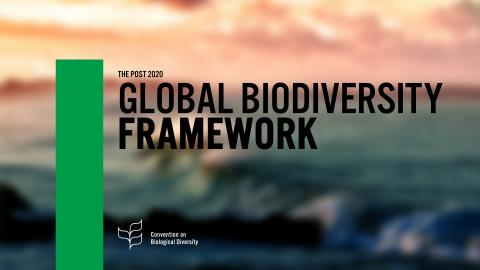